As soon as your plane lands, our driver will already be waiting for you to start your trip Imperial Cities and Chefchaouen. We will start our trip towards Casablanca, where we will visit the Hassan II Mosque, the second largest mosque in Africa after Mecca. After the visit, we will drive to Rabat. Once we reach Morocco’s capital city, we will visit the Kasbah of the Udayas, an ancient military fortress that was declared a World Heritage Site in 2012 by UNESCO.

In this citadel, we can find the famous monumental door Bab el-Kébir, as well as one of the first palaces ever built by the Alaouite dynasty, which still reigns over Morocco. We will then visit the Hassan Tower. On the esplanade, we will see a minaret and dozens of columns, which are the remains of an unfinished mosque.

The Mausoleum of Mohammed V, the first king of independent Morocco, was also built on the unfinished mosque’s esplanade. He is buried in the mausoleum, as well as his son and successor Hassan II, father of the current king. Free time. Night at the hotel.

After breakfast, we will head towards Chefchaouen. Chefchaouen is located in the only intercontinental natural park, declared a Natural Biosphere Reserve. The oldest part of town stretches towards the top of the mountain and, at its highest point, we can find the Ras al-Ma springs. A citadel and a mosque with an octagonal base tower can be found at the Uta al-Hammam Square, the heart of the town.

The Grand Mosque of Chefchaouen is another one of the town’s landmarks. The new part of town has been erected underneath the old town.  Inhabited by wise, kind and respectful people, Chefchaouen offers beautiful urban landscapes, fine local handicrafts, and a state of peace and calm that is quite hard to find in our modern society. Night at the hotel.

Some thermal baths, oil presses, shops, as well as some houses, which follow the typical Roman design, have also been unearthed. Decorative mosaics have also been discovered in the residencies of the richest inhabitants. We will then have a panoramic view of the holy city of Moulay Idriss. We will arrive to Fez, another of the Imperial Cities, in the afternoon. Free time. Night at the hotel.

After a delicious and fulfilling breakfast at the hotel, we will start our guided tour, through the oldest of the Imperial Cities,  in the new part of the city, where we will discover the Royal Palace and the Jewish quarter (Mellah). We will also go to a viewpoint from where we will have an overview of the medina from the Southern Tower and the mosques.

We will then wander around the medina, declared World Heritage Site by UNESCO. We will visit the Al-Karaouine University; the Nejjarine Fountain; and the Cherratine and Al-Attarine Madrasas, both decorated in an Arabic style and devoted to the study of religion. We will soon notice that it’s a medieval city, where time has stopped on the Dar al-Magana’s clock 1200 years after its completion.

The tour includes a visit to a ceramic workshop. Its labyrinth-like narrow streets are organized by unions: potters, dyers, tanners… The bustle of these people will make us travel back in time. Free time. Night at the hotel.

Breakfast and free time until the agreed time for your transfer to the airport. Airport drop-off. End of our tour Imperial cities and Chefchaouen and end of our services.

Don’t forget to visit our different route options from Casablanca! 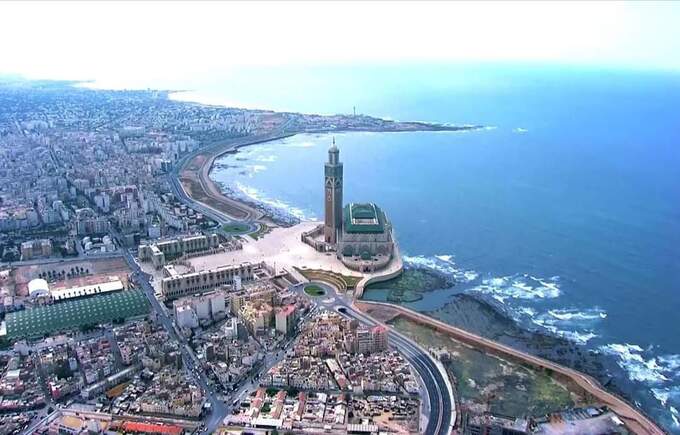